Mistress of The Moonlit Oasis

A bright young woman who was caught in the crossfire
of lies and deceit, and, through the cruel hand of fate,
lost herself along the way.

This young Miqo'te woman stood at a mere five feet high, her skin kissed by the desert sun, yet still set
in stark contrast by her long dark-chocolate locks, unkempt and left to flow in the winds.

Her frame is petite, but her figure is slightly curvy. Across her left cheek lay a diagonal scar, thinly cut.

She tends to be seen mostly in the finest gowns and jewelry, with her dark hair curled into perfect ringlets. It would be easy to overlook the ebony pendant, a crescent wrapped around a compass, if the buttonless crevasse of her blouse’s neckline didn’t allow the stark contrast of the jewelry on her pure skin to stand out like the stars of a moonlit night.

Her personality seems to adapt to the people she is around:

Political Powers / Nobility: Her mannerisms and speech reveal that she was likely adopted into higher class society, or at least had been around it long enough. She is well-mannered, poised, and cordial. On the outside, she is just your typical noblewoman. But is there more than meets the eye?

Other Performers / Troupes: She seems positively blissful and in her own world at times. She may come off a bit airheaded and giggly, and she seems to dance with every movement, but there is certainly something emanating from this woman: freedom.

Her Friends: Unlike with those she doesn't know, she doesn't have a filter around those she truly deems friends...which is both a good and a bad thing, depending on the way one looks at it. Her remarks contain sharp wit, and she seems to always be joking about one thing or another. Is this how she truly is, or is this just another one of her masks?

Not much is known of this woman, as she seems to be but a pretty face in the crowd at many lavish balls and political socials. One may recognize her as a famous songstress and firedancer known around Ul'dah and Ala Mhigo as "The Desert Dahlia." Others may swear to recognize her as someone who has done infiltration work with the Rogues. However one may meet her, one would hope it would not be at the pointed end of her blade.

Walkups adored! I am 25+, so dark or mature themes are not only welcome, they are encouraged!
I am very shy to walk up, so please feel free to send me a /tell.

I am an experienced roleplayer with about a decade under my belt. I am always looking for RP connections, criminal or otherwise. It is important to note that she may use her alias when introducing herself to your character for IC reasons.

PVE: Even if you don't think our characters would end up meeting eachother, I also like the PVE aspect of the game. Despite K'inja being a rogue ICly, I main an AST and will gladly help with roulettes~

I am an experienced performer ICly and OOCly. I have been choreographing performances for
over five years now.

What I do: I write macros that include a smooth and entertaining combination of emotes, spells of various jobs, items, and glam changes. I time the macros to real time music, and use watch2gether as my music streamer, since plug.dj seems to be not working very well with YouTube. I have a collage of written dances for all sorts of genres to fit any theme! I do not claim to own the rights to any real music I use, I am just playing from YouTube. No real payment is necessary, IC gil works just fine.

Hire The Desert Dahlia to firedance and sing, and whatever the occasion, you can be sure that it will be a night to remember! 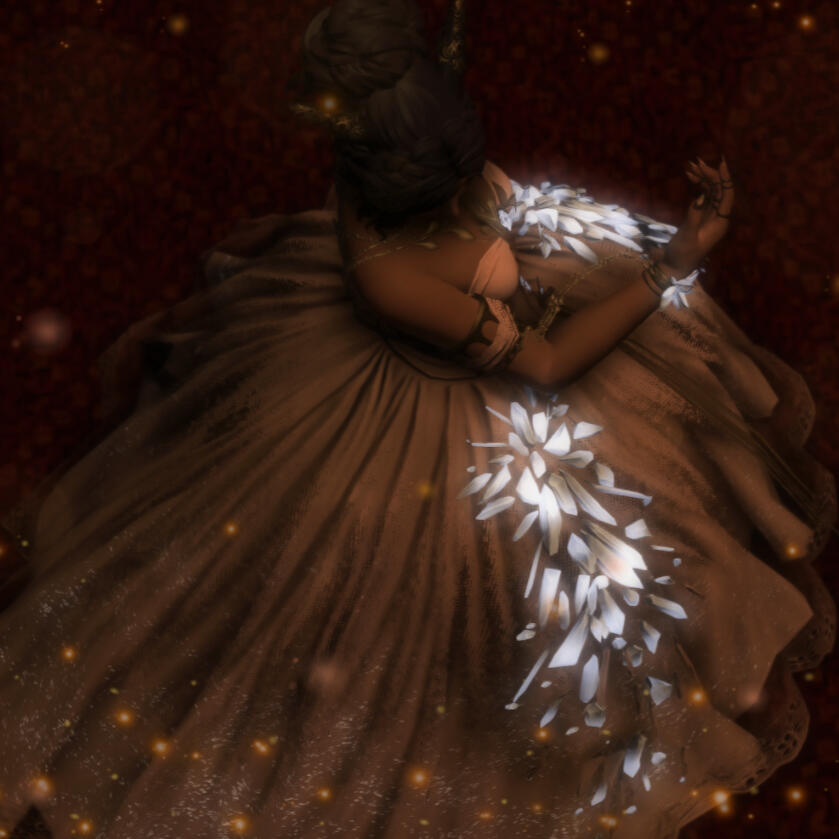 " Promise me one thing: that no matter what, we will always be together."

" You're the only good thing in this Twelve Forsaken city, don't you ever forget it."

" If I could ask Azeyma one thing, it would be to stop the moon. Stop the moon, and let this night, and your beauty, last forever."

" I don't know how else to say it...I look up to you. That is why I wrote that song: my admiration knows no bounds."

" That woman possesses a strength that I fear I will never have...though she's faced countless hardships, she carries herself gracefully with a smile."

" I still can't quite figure her out...I suppose she is like me, in that sense. So many mysteries yet to uncover."